“USB-C all the things!”, says the new MacBook pro. Last November, shortly after its announcement, I went online to Apple and purchased a Built-to-Order (BOT) late-2016 15-inch MacBook Pro with Touch Bar in the space gray color. That purchase instantly created a conundrum for my external storage strategy. At the time, the external hard drive I used with my previous machine only supported USB 2.0, FireWire 400/800, and Ethernet interfaces for external HDDs. Using my J5 Create USB-C 4-port hub, I could continue to use that hard drive but the data transfer speed would be bottlenecked by the slower side of the connection between the USB-A 2.0 port on the external hard drive to USB-C 3.1 Generation 2/Thunderbolt 3.0 port on the MacBook Pro.

I did a bit of research online for USB-C compatible external hard drives, attempting to find the sweet spot between price point, data transfer speed, and storage capacity, with some points given to looks thanks to the influence of my Hitachi G-drive external HDD. My MacBook Pro has 512 GB of storage so at minimum the new external hard drive would have to have twice the amount of storage capacity. After the fat lady sang, I chose the MiniPro by Oyen Digital with 1 TB of storage capacity. The Oyen Digital site allows one to configure the storage amount, with the price changing accordingly. My configuration was a 1TB platter for $100, where as the equivalent storage amount for solid state cost much more. The hardware took about 2 – 3 days to get to my doorstep.

The table below compare the new external Mini-Pro HDD against the G-Drive that served me well for over 5 years:

Below are some pictures of the two together:

Taking the drive out of the box, I got the initial feeling of it being smaller than expected. But, after a quick size comparison to the G-Drive, the feeling ceased existing. I wish a space gray color was available to match the MacBook, but black goes with everything. The chassis is a smooth and sturdy all-metal black casing that is cold to the touch. This is distinctly different from the G-Drive which has a 3/4 metal chassis with a silver color with black plastic (or glass) on the top. One plus for the G-Drive is that is aesthetic closely resembles the mid-2009 13-inch MacBook Pro for which is was purchased.

Admittedly, I did not see the purpose or need for the Mini-Pro’s ON/OFF switch at first. However, over time it has grown on me. My previous external HDD did not have this feature, and would simply power on when connected to the Mac. The MiniPro’s ON/OFF switch makes it possible to plug connect the drive to the Mac without powering on. I guess that is a good thing for those want “absolute control” over the drive’s operation. From the first picture above, the MiniPro provide a DC power input for extra power if needed, something not present on the G-Drive.

The drive while powered on and mounted can get very loud. The spinning of the platter is very audible and distinct. If the drive is unmounted but still connected and powered, the platter will stop spinning after about a minute or two and thus the associated sound will die. If the ON/OFF switch is moved to the off position the sound and spinning quickly cease.

One apparent difference between the MiniPro and the G-Drive, is that the metal chassis of the MiniPro stays cool even under “heavy” use. I cannot think of the last time that was true for my G-Drive. The black plastic (or glass) top of the G-Drive gets hot, but nothing that would scar someone. But make no mistake about it, my G-Drive served honorably and without any major hiccups in the time I have owned it. However, the lack of USB-C or a reasonably priced hub with FireWire 400/800 has forced the G-Drive into semi-retirement. I say “semi” because I still own my mid-2009 13-inch MBP and occasionally boot it up to do things.

A View from the MacOS

Plugging the HDD into the Mac for the first time, Disk Utility indicated the initial formatting as ex-FAT. That changed after using Disk Utility to format the HDD to HFS+ Journaled. The following is a current snap shot after weeks of use of the drive. This was taken from About This Mac: 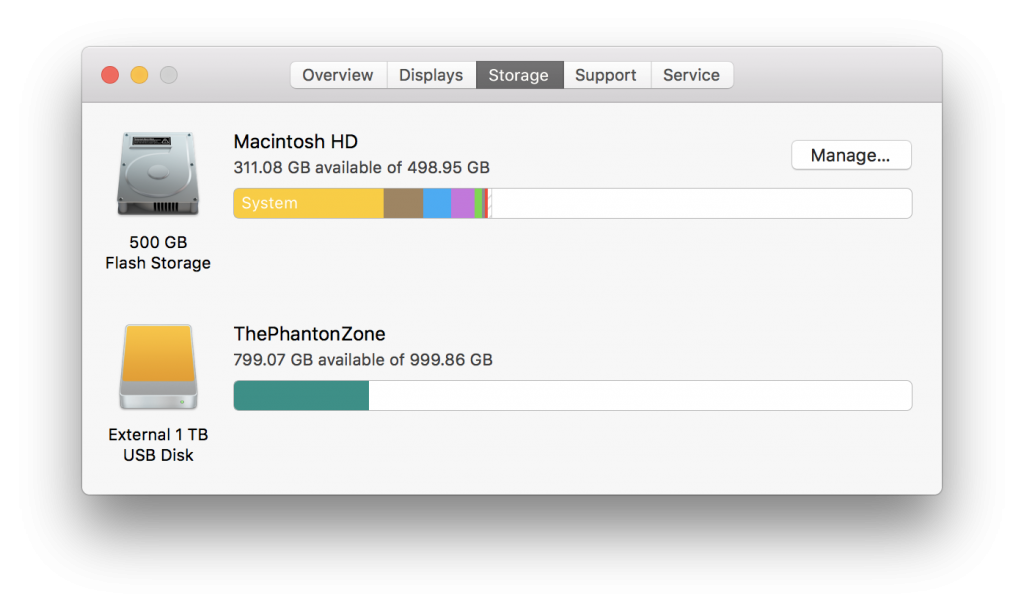 Here, the external HDD labeled “ThePhantomZone” is the MiniPro renamed after the disk formatting via Disk Utility. Going into System Report we get this view of the volume: 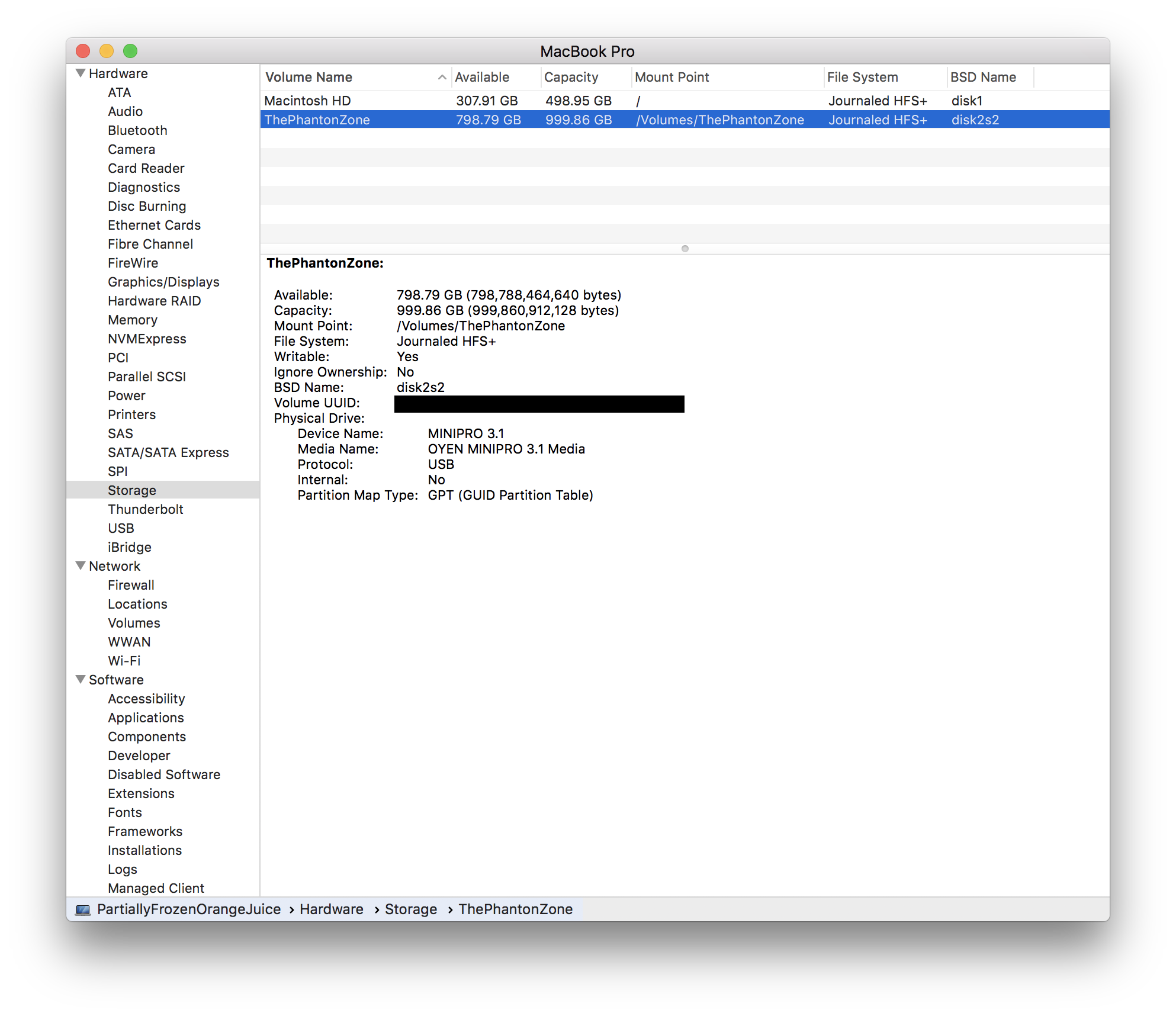 Using the MiniPro with TimeMachine

The transfer of data during a TimeMachine Backup process is quick. There was one occasion where the backup took quite a while, but this is most likely attributed to the fact that several applications had been updated since the previous backup. I do not perform hourly backups and prefer doing backups once every three days. I move around frequently in my apartment with the laptop and in most cases having an external drive connected would be a pain. So far, all backups were performed via the USB-C to USB-C cable between the HDD and the Mac. In the future, I will perform a backup using the USB-C to USB-A cable that came in the box via the J5 Create USB-C hub just to gauge the performance, however help that may be.

I highly recommend this external HDD to anyone looking for a fast USB-C 3.1/Thunderbolt 3 drive that is definitely not expensive, especially for MacBook Pro 2016 owners.